IV Infusions in The Woodlands

Your health & wellness is important to us. We offer quick hydrating immunity boosting IV’s for quick recovery after an illness and preventative IV’s to maintain good health and vitamin wellness.  This pairs well with our hormone replacement therapies for better mental health, sexual health and energy levels.  Replenish your body with nutrients that improve your skin’s overall appearance, provide enhancing hydration and skin, hair, and nail improvement, prevent illness and encourage quicker recovery!

A complete nutritional diet has an immediate impact on mood, just like exercise has an immediate impact on energy. Unfortunately, most people consume very little of what the body needs to lead a productive life that can effectively manage high levels of stress. Common side effects of dealing with day to day stress may include blurred vision, chronic fatigue, and even mood swings. IV infusions are the perfect way to enhance any treatment, to beautify, strengthen or rejuvenate from inside as well as out.

Our nurses can create custom blends based on your individual needs. IV drips are pain free and leave you feeling all around refreshed while delivering essential vitamins ready to tackle any depletion your body might be facing. High quality ingredients balanced with blends of vitamin B-complex, electrolytes, L-carnitine, glutathione, amino acids and vitamin-C will restore your bodies natural resilience, recovery patterns and enhance the ability to combat fatigue!

Infusions can be easily added onto most services and generally take between 45-60 minutes each. Drip with friends! You can also schedule ahead for group treatments and discounts for 3 or more clients! 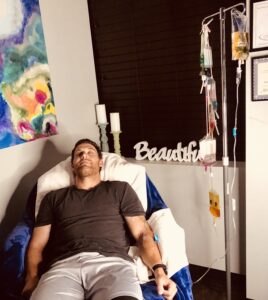 Amino acids can be used by the body to produce energy, but their primary function is to build proteins. Certain amino acids may also fill non-protein-building functions; such as in the formation of neurotransmitters or hormones.  Amino injection is a combination of three conditional, non-essential amino acids: L-Arginine, L-Citrulline, and L-Ornithine that can play a critical role in your health & wellness:

The body cannot store amino acids, so a regular daily supply of these essential building blocks of protein is needed. Amino acids are separated into three categories: essential, nonessential, and conditional.

Essential Amino Acids: Essential amino acids are the amino acids that are present in foods – since the body cannot produce them endogenously.

L-Citrulline: L-citrulline is an amino acid that boosts the production of nitric oxide in the body. Nitric oxide acts to relax the arteries for improved blood flow throughout the body.

Some studies indicate that l-citrulline may help people with diabetes that have circulatory issues such as slow wound healing. Because of its effects in increasing nitric oxide production, l-citrulline supplementation may improve dilation of blood vessels and blood flow that can improve the symptoms of mild to moderate degrees of erectile dysfunction great for men and women.

L-arginine has been used in several studies including recurring pain in the legs from blocked arteries, decreased mental capacity due to age (dementia), and male infertility.

In addition to other amino acids, arginine has been used to treat cachexia (wasting) in people with cancer and with fish oil and certain supplements to help reduce infections, improve healing, and shorten recovery times after surgery. It has also been used in protocols used to diagnose growth hormone deficiency since it may stimulate the release of that hormone.

L-Ornithine: L-ornithine is another nitrogen precursor like arginine. It is also the amino acid used in the body’s urea cycle, which makes it possible to eliminate excess nitrogen (ammonia) from the body. The amino acids in Tri-Amino Injection may affect how certain drugs work in the body. Don’t take this supplement if you are using nitrates to treat heart disease, any type of medicine for hypertension or ED drugs like sildenafil, tadalafil or vardenafil. The combination of Tri-Amino Injection with these drugs could result in a dangerous drop in blood pressure.

Glutathione injections are quick and powerful. This injection is referred to as “master antioxidant” that protects cells from disease, fights free radicals and reduces inflammation and general illness.  It even addresses uneven skin tone and dry patches and aids low levels of rosacea. The kidneys are highly dependent on an adequate supply of glutathione (GSH) to maintain normal function.

Glutathione has many important functions, including:

Interested in IV Vitamin Heath & Wellness treatment? We offer a zero-obligation personalized consultation to help answer any questions you may have.

Please note that no statements on this website have been reviewed or evaluated by the U.S. Food and Drug Administration. This product is not intended to diagnose, treat, cure or prevent any disease.

Testimonials for these products reflect individual experiences and your results may vary. Please consult your physician before using any supplements with or without any other medications. These supplements are for adult use only. Do not take if you are pregnant or lactating, or if you are on blood thinners.

Are you a new patient? Save 30% on your first CoolTone by CoolSculpting or CoolScupting Elite Treatment